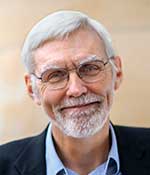 
Peter Lepage received his B.Sc. degree in physics from McGill University in 1972, his M.A.St. degree in theoretical physics from Cambridge University in 1973, and his Ph.D. in physics from Stanford University in 1978. He has been a professor of physics at Cornell University since 1980, and was dean of the College of Arts and Sciences at Cornell between 2003 and 2013. His research focuses on high-precision analyses in QED and QCD. He has adapted renormalization techniques and effective field theory for applications in precision atomic physics and nuclear physics for few-body systems. He has applied similar techniques to the strong-interaction physics of heavy-quark systems, and exclusive processes with large momentum transfer. In recent years he has done extensive work using large-scale numerical simulations of nonperturbative QCD (lattice QCD). He is author of the widely used vegas algorithm for adaptive Monte Carlo integration. He is an APS fellow and was named an outstanding referee by the APS in 2009.