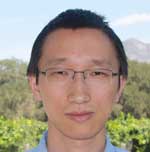 
"For the development of a new self-consistent equation of state of nuclear matter that provides a unified description of nuclei and hot dense matter, and is suitable for use in numerical simulations of core-collapse supernova, neutron star merges and related extreme astrophysical phenomena."


Gang Shen received a B.E. degree from Zhejiang University, China in 2002, and a M.S. degree in physics from Peking University, China in 2005. He then came to Indiana University at Bloomington and worked under the guidance of Professor Charles Horowitz. He was awarded a Ph.D. degree in 2010 for his thesis on new equation of state (EOS) of hot dense matter in a self-consistent framework for both nuclei and nuclear matter. As a graduate student in Bloomington he received the William Koss fellowship.

Following his Ph.D. he moved to Los Alamos National Laboratory as postdoctoral researcher, working on both neutrino-nuclear matter interaction in supernova and neutrino-nucleus cross section for laboratory experiments. Currently he is a research associate in the National Institute for Nuclear Theory at University of Washington. His current research interests focus on the neutrino interactions in astrophysics, and how the uncertainties in EOS/neutrino interactions lead to observable differences in extreme astrophysical phenomena, in particular core-collapse supernova and binary neutron star mergers.