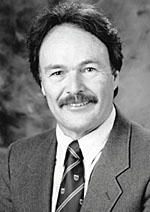 
"For his extensive use of a blend of modern analysis, innovative numerical computation, and experiments to elucidate phenomena in classical and polymer fluid dynamics."


Dr. Leal graduated with a BS degree in chemical engineering from the University of Washington (Seattle) in 1965. He then attended graduate school at Stanford University, where he carried out his PhD research under the guidance of Prof. Andreas Acrivos and was awarded both an MS (1968) and PhD (1969) degree. Dr. Leal then went to Cambridge England for approximately 2 years of postdoctoral work with Prof. G.K. Batchelor in the Department of Applied Math and Theoretical Physics. He then joined the faculty at Caltech (1970) in Chemical Engineering, where he remained until moving to UCSB in 1989. During his tenure at Caltech, he was recognized as the Chevron Professor of Chemical Engineering. At UCSB, he served as Dept. Chair in Chemical engineering for 9 years. In addition to his normal professional duties, he is currently one of the two editors of Physics of Fluids. He has received a number of other awards for research and professional recognition including the Allan P. Colburn (1978) and the William H. Walker (1993) Awards of the AIChE, and the Bingham Medal from the Society of Rheology (2000). Dr. Leal was elected to the National Academy of Engineering in 1987.