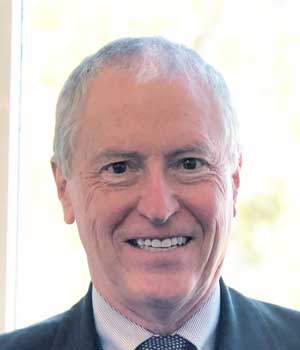 
George T. “Rusty” Gray, III, is a laboratory fellow in the dynamic properties and constitutive modeling team within the Materials Science Division of Los Alamos National Laboratory (LANL). He received his B.S. in 1976 and M.S.  in 1977, both from South Dakota School of Mines and Technology. He came to LANL following a three-year visiting scholar post at the Technical University of Hamburg-Harburg in Germany after completing his Ph.D. in materials science in 1981 at Carnegie-Mellon University. He conducts fundamental, applied, and focused programmatic research on high-strain-rate and shock deformation. He is a life member of Clare Hall, University of Cambridge, where he was completed a sabbatical in 1998. He co-chaired the Physical Metallurgy Gordon Conference in 2000. He is a fellow of the American Physical Society, the American Society of Metallurgy International, and the Minerals, Metals, and Materials Society, for which he served as president in 2010. Currently, he serves on the advisory board of the European DYMAT Association and chairs the Acta Materialia Board of Governors which oversees publication of the journals Acta Materialia, Scripta Materialia, Acta Biomaterialia, and Materialia. He has authored or co-authored over 440 publications. In 2017 he was elected to the National Academy of Engineering and in 2018 was awarded the Rinehart Award from the DYMAT Association.