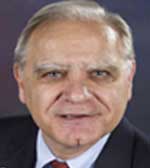 
George Kyrala is a senior scientist at the Los Alamos National Lab.  Since he graduated from the American University in Beirut with BS in Physics and Yale with PhD in Atomic Physics he has worked at JILA and Univ. of Arizona before he joined Los Alamos National Lab. At Los Alamos.  At JILA he measured the absolute cross sections for excitation of H, H2 and He.  At Univ of Arizona he and William Wing measured the absolute frequency of HeH++ using a merged Ion-Laser techniques. At LANL George performed many experiments in Laser driven x-ray generation, hohlraum characterization, x-ray imaging of capsules at Omega and imploding cylinders on pulse power machines.  George also used femtosecond laser pulses to study the absolute multi-photon ionization cross sections for atomic hydrogen, and their interaction with material to generate of short pulse x-rays and the x-ray  spectroscopy of their plasmas.   George is a recognized expert in X-ray science, laser plasma interactions and atomic collision science. He has been recognized with  international awards, such as  the Harold Edgerton Award and the Photosonics award from SPIE, and has been elected a Fellow of the American Physical Society, and SPIE. Currently, George is interested in implosion physics driven by lasers and hohlraums, studying the effects of their irradiation symmetry and mix on the implosion performance.