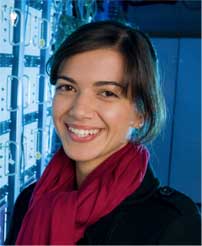 
Georgia Karagiorgi completed her undergraduate degree at Florida Institute of Technology in 2004. She received her Ph.D. in Experimental High Energy Physics from Massachusetts Institute of Technology in 2010, under the supervision of Prof. Janet Conrad. Her doctoral thesis work was completed on the MiniBooNE experiment at Fermilab, and its focus was the first antineutrino appearance search at MiniBooNE. The search served as a direct test of the LSND evidence for sterile neutrino oscillations, and as an independent test of the low energy excess previously observed in the neutrino appearance search performed by the MiniBooNE collaboration. Dr. Karagiorgi's findings revealed direct agreement with LSND, but incompatibility with the neutrino results, which prompted many in the theoretical neutrino community to consider sterile neutrino oscillations with CP-violation as an interpretation of the LSND and MiniBooNE results. Dr. Karagiorgi pursued this possibility independently, and found that sterile neutrino oscillations with CP violation alone are insufficient in explaining the global experimental picture. Her results prompted the consideration of other non-standard physics as possible explanations of the LSND and MiniBooNE results, and inspired new experimental proposals to further test those possibilities. As a graduate student, Dr. Karagiorgi was the recipient of several awards including the Martin Deutsch Award for Excellence in Experimental Physics by the MIT physics department (2009); the Young Scientist Award by Nuclear Physics A (2008); and the Doug Michael Memorial Experimental Neutrino Challenge Award (2007). Currently, she is a post-doctoral researcher at Columbia University, where she is involved in the construction of the MicroBooNE experiment. MicroBooNE is a forefront liquid argon TPC neutrino experiment in the US. With her participation in MicroBooNE, Dr. Karagiorgi aims to further explore the sterile neutrino oscillation hypothesis associated with the MiniBooNE and LSND experiments and study the nature of the MiniBooNE low energy excess, as well as address important R&D questions for next-generation neutrino detectors which will look for CP violation in the standard three-neutrino sector.