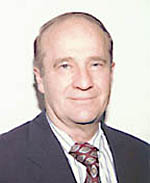 
Dr. Gerald Dolan received his BA in Physics in 1967 from the University of Pennsylvania and his Ph.D. in Physics from Cornell University in 1973 with Prof. John Silcox as his advisor. He undertook a post-doctoral position at SUNY, Stony Brook, NY in 1973 for three years, under Prof. J. E. Lukens. He then moved to AT&T Bell Laboratories in Murray Hills, NJ where he worked from 1976 to 1987 where he began initially as a post-doctoral fellow under T. A. Fulton. In 1988 he worked at the IBM T. J. Watson Research Center for two years after which he moved on to the University of Pennsylvania where he served from 1989 to 1996 as Trustee Chair and Professor of Physics. Currently, Dr. Dolan is working only as a consultant primarily for Immunicon Corporation in Pennsylvania and briefly at Twente University, Netherlands. This recent work involves physics for medical improvements (at room temperature) although his primary work in Physics has been on low temperature physics and electron beam lithography and microscopy relevant to the recently prized work on single electron effects on small tunnel junctions