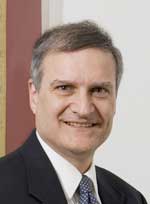 
Gerald A. Navratil received his bachelors degree in physics from the California Institute of Technology in 1973 and his Ph.D. in plasma physics from the University of Wisconsin-Madison in 1976. In 1977 he joined the faculty of Columbia University and in 1978 was a founding member of the Department of Applied Physics and Applied Mathematics, serving as department chair from 1988 to 1994 and from 1997 to 2000. His research work focuses on MHD equilibrium and stability of magnetically confined plasmas. He directs research on the HBT-EP tokamak facility in the Columbia Plasma Physics Laboratory as well as off-campus collaborations at the DIII-D National Tokamak Facility in San Diego and the NSTX Experiment at the Princeton Plasma Physics Laboratory.

Navratil was President of the University Fusion Association in 1991 and 2005-2006, and co-chair of the 2002 Fusion Energy Sciences Summer Study held at Snowmass. He was named an Alfred P. Sloan Research Fellow in Physics in 1984, a Fellow of the American Physical Society in 1989, and in 2006 received the Fusion Power Associates Leadership Award. In 2005 he was appointed the Thomas Alva Edison Professor of Applied Physics and now serves as Interim Dean of the School of Engineering and Applied Science at Columbia University.