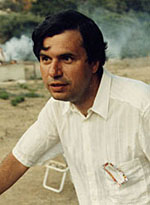 
Giorgio Parisi was born in Rome 4/8/48. He graduated from Rome University in 1970. He has worked as researcher at the Laboratori Nazionali di Frascati from 1971 to 1981. In this period he has been also at the Columbia University, at the Institute des Hautes Etudes Scientifiques and at the Ecole Normale Superieure.

From 1981 to 1992 he was full professor of Theoretical Physics at the University of Roma II, Tor Vergata and he is now professor of Quantum Theories at the University of Rome I, La Sapienza. He received the Feltrinelli prize for physics, the Boltzmann medal, the Italgas prize, the Dirac medal and prize, the Enrico Fermi prize. He is fellow of the Accademia dei Lincei, of the French Academy of Sciences, of the Accademia dei XL and of the National Academy of Sciences.

However, his deepest contribution concerns the solution of the Sherrington-Kirkpatrick mean field model for spin glasses. After the crisis caused by the unacceptable properties of the simple solutions, which used the "replication trick," Parisi proposed his replica symmetry breaking solution that has been proven to be exact 25 years later, although much more complex than anticipated. Later, Parisi and co-workers Mezard and Virasoro clarified greatly the physical meaning of the mysterious mathematics involved in this scheme, in terms of the probability distribution of overlaps and the ultrametric structure of the configuration space. This discovery opened the doors to vast areas of application, e.g. in optimization problems and in neural network theories.