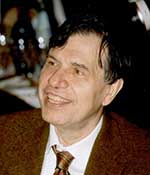 
"For groundbreaking work applying spin glass ideas to ensembles of computational problems, yielding both new classes of efficient algorithms and new perspectives on phase transitions in their structure and complexity."


Giorgio Parisi graduated with a degree in physics from Rome University in 1970. He worked as a researcher at the INFN Laboratori Nazionali di Frascati for ten years and then in 1981, became full professor of Theoretical Physics at the University of Rome II, Tor Vergata. He is now a professor of Quantum Theories at the University of Rome I, La Sapienza. Parisi has written more than 600 articles and he has authored four books. In his scientific career he worked mainly in theoretical physics, addressing topics as diverse as particle physics, statistical mechanics, fluid dynamics, condensed matter, the constructions of scientific computers. Among his many honors, he has received the Boltzmann Medal in 1992, the Dannie Heineman Prize in 2005, the Nonino Prize in 2005, the Max Planck Medal in 2011, the Vittorio De Sica Prize in 2011, the Nature Award for Mentoring in Science in 2013, and the EPS High Energy and Particle Physics Prize in 2015. He is a member of the Accademia dei Lincei, of the French Academy, of the Accademia dei Quaranta, of the American National Academy of Sciences and of the American Philosophical Society.