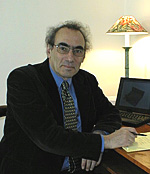 
"For his superb synthesis of fundamental concepts which have provided an understanding of matter at extreme conditions, ranging from crusts and interiors of neutron stars to matter at ultrahigh temperature."