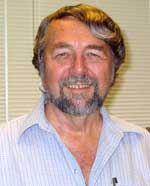 
Guenter Ahlers received a B.A. in chemistry from the University of California at Riverside in 1958. In 1963 he received his Ph.D. in physical chemistry from the University of California at Berkeley and became a member of the technical staff at Bell Laboratories. Then he worked on critical phenomena and on superfluid hydrodynamics. In 1970 he began research on Rayleigh-B\'enard convection in liquid helium that led to the experimental observation of chaos in a fluid-mechanical system. In 1979 Ahlers became a Professor of Physics at UCSB where he studied pattern formation in convection and Taylor-vortex flow, and turbulent Rayleigh-B\'enard convec-tion. He and his co-workers published over 260 papers in the Journal of Fluid Mechanics, Phys-ics of Fluids, Physical Review A, B, and E, Physical Review Letters, and elsewhere.

Ahlers became a Fellow of the APS in 1971 and of the AAAS in 1990. He received the Fritz London Memorial Award in low-temperature physics in 1978 and the Alexander von Humboldt Senior US Scientist Award in 1989. In 1998 he was a Guggenheim Fellow. He was elected to the US National Academy of Sciences in 1982 and became a Fellow of the American Academy of Arts and Sciences in 2004.