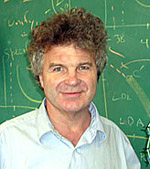 
"For his extraordinary contributions to human rights, for his initiatives on behalf of female physicists, and for his caring and supportive relationship with those who have worked in his laboratory."


Stanley was born in Oklahoma City on 28 March 1941. He obtained his B.A. in physics at Wesleyan in 1962, performed biological physics research with Max Delbruck in 1963 (on a Fulbright in Germany), and was awarded the Ph.D. in physics at Harvard in 1967. Stanley was a Miller Fellow at Berkeley, before becoming assistant professor of physics at MIT in 1969. He was promoted to associate professor in 1971 and to Herman von Helmholtz Associate Professor in 1973, in recognition of his interdepartmental teaching and research with the Harvard-MIT Program in Health Sciences and Technology. In 1976 Stanley joined Boston University as a professor physics and as an associate professor of physiology in the School of Medicine. In 1978 and 1979, he was promoted to Professor of Physiology and Univ. Professor, respectively.

Stanley has served as thesis advisor to 77 Ph.D. candidates at MIT and Boston University, and has worked with 98 postdoctoral level research associates. He is known for his commitment to international education and cooperation. For example, he co-founded a series of NATO Advanced Study Institutes in interdisciplinary physics in Carg\`ese, co-directed the 1996 Enrico Fermi School of Physics on Complex Systems, and chaired the 1998 Gordon Conference on Water. In 1986 he chaired the triennial IUPAP International Conference on Statistical Mechanics. Stanley pressed for the reform of medical education through the introduction of concepts and techniques of the physical sciences. He created new courses in human anatomy and physiology that allow physics and engineering to play roles parallel to that currently played by biochemistry.

Stanley works in collaboration with students and colleagues attempting to understand puzzles of possible interest to biological physics, including the structure and dynamics of liquid water, Albatross behavior, membrane-active antibiotics, cooperative phenomena in hemoglobin, quantifying correlations among constituents of the Alzheimer brain, fluctuations in noncoding and coding DNA sequences, heartbeat intervals and lung inflation, and gastrointestinal physiology. Four of his papers have been among the most-cited publication in the year that they were published, and two were reproduced in The Physics Review: The First Hundred Years: A Selection of Seminal Papers and Commentaries. In recognition of his work, Stanley has received the Distinguished Teaching Scholar' Director's Award from the National Science Foundation, a Guggenheim Memorial Fellowship, a BP Venture Research Award, the 1997 Floyd K. Richtmyer Memorial Lectureship Award, the Choice Award for Outstanding Academic Book of 1971, and the Massachusetts Professor of the Year (awarded by the Council for Advancement and Support of Education). He was elected to fellowship in the APS and the AAAS Fellow, is an Honorary Member of the Hungarian Physical Society, and is an Honorary Professor at Eotvos Lorand University in Budapest, Hungary.

Stanley believes that education and coaching of the next generation requires that this generation create opportunities for appropriate utilization of talent of physicists of all ages. This in turn requires active work on behalf of professional organizations, not only to lobby for increasing funding but also to distribute information about employment opportunities in a fashion that scientists of all ages can feel productively engaged. Sometimes ove