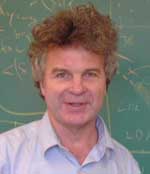 
"For contributions to the deeper understanding of phase transitions and critical phenomena in complex systems; and for excellence in communicating the excitement of interdisciplinary research to a wide range of audiences."


H. Eugene Stanley obtained his B.A. in physics at Wesleyan University in 1962. He performed biological physics research with Max Delbrueck in 1963 and was awarded a Ph.D. in physics at Harvard in 1967 after completing a thesis on critical phenomena in magnetic systems under the guidance of T. A. Kaplan and J. H. Van Vleck. Stanley was a Miller Fellow at Berkeley with C. Kittel from 1968 to1969. From 1969 to1976 he was a professor in the physics department at MIT. In 1976 Stanley joined Boston University as a professor in the physics department and the School of Medicines physiology department. In 2007 he was given joint appointments with the chemistry and biomedical engineering departments.

Stanleys main focus is understanding the anomalous behavior of liquid water in bulk, nanoconfined, and biological environments. He has also worked on a range of other topics in complex systems, such as quantifying correlations among the constituents of the Alzheimer brain, and quantifying fluctuations in noncoding and coding DNA sequences, and interbeat intervals of the healthy and diseased heart.

Stanley has received numerous honors and awards, including the Boltzmann Medal, given by the Int'l. Union of Pure and Applied Physics, the ``Distinguished Teaching Scholar'' Director's Award from the National Science Foundation, and the APS Nicholson Medal for Human Outreach. He was elected to the US National Academy of Sciences and the Brazilian Academy of Sciences.