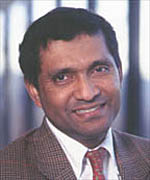 
"For pioneering contributions to nanoscale measurement science through their leadership in the development of a range of nanoscale force microscopes that have had major impact in many areas of physics."


Dr. H. Kumar Wickramasinghe received his B.Sc. and Ph.D. degrees in Electrical Engineering in 1970 and 1974 respectively, both from the University of London. After a post-doctoral appointment in the Applied Physics Department at Stanford University, he joined the Electrical Engineering Department, at University College, London, in 1978, gaining tenure in 1982. In 1984, he joined IBM, T. J. Watson Research Center, Yorktown Heights, New York, where he is currently Manager of Imaging Science and Measurement Technology in the Physical Sciences Department. His research interests are focused on novel Scanning Probe Microscopes, near-field optics including its application to storage and in-situ measurements that improve the yield and/or throughput of manufacturing lines.

Dr. Wickramasinghe is a fellow of the APS, Institute of Physics, IEE and Royal Microscopical Society. He was elected to membership of the National Academy of Engineering in 1998. He received the IEEE Best Paper Award (G-SU Transactions) in 1982, the V. K. Zworykin Premium of the IEE in 1983, the IEEE Morris E. Leeds Award in 1992 and the Distinguished Corporate Inventor Award, National Inventors Hall of Fame in 1998. He was chosen Centennial Lecturer for the APS in 1999.