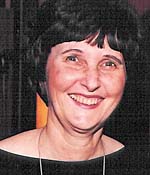 
"For theoretical insights and carefully executed experiments on the detailed dynamics of small molecules."


Hanna Reisler obtained her B.Sc. and M.Sc. degrees from the Hebrew University of Jerusalem, Israel, in 1964 and 1966, respectively, and a Ph.D. in Physical Chemistry from the Weizmann Institute in 1972. She was awarded an Atomic Energy Agency Fellowship to pursue postdoctoral studies at the Johns Hopkins University during 1972-1974. In1974-1977 she was a group leader of the Chemical Laser Project at the Soreq Nuclear Research Center, Yavne, Israel. She came to USC in 1977 and held research positions in the Departments of Electrical Engineering, Physics and Chemistry. She was appointed Associate Professor of Chemistry in 1987 and Professor in 1991. Her research interests are in the area of reaction dynamics, in particular photodissociation dynamics and unimolecular reactions of small gas-phase molecules and radicals studied by imaging techniques and interactions of molecules on thin films and on single crystal surfaces. She has won the NSF Faculty Award for Women Scientists and Engineers in 1991, and a Max Planck Research Award in 1994. In 2002 she was appointed as the first holder of the Women in Science and Engineering Gabilan Chair. She is a Fellow of the American Physical Society and a member of the American Chemical Society.