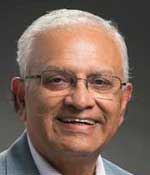 
"For his leadership and pioneering world-renowned research in superconducting radiofrequency physics, materials science, and technology, which contributed to remarkable advances in the capability of particle accelerators."


Prof. Hasan Padamsee received his BS in Physics from Brandeis University in 1967, and his PhD in Physics from Northeastern University, Boston Mass in 1973. Since then he worked at Cornell University in Superconducting Radio Frequency (SRF) science and technology for application to a wide variety of Particle Accelerators. His scientific contributions to SRF include understanding the nature of thermal breakdown and curing it by using high Resistivity Ratio, pure Niobium. In 1981 he was a visiting scientist at CERN. At Cornell he launched in 1990 the TeV Energy Superconducting Linear Accelerator (TESLA) which morphed into the TESLA collaboration headed by DESY, and subsequently into the International Linear Collider (ILC). After teaching SRF courses extensively at USPAS and CERN Accelerator Schools, he authored two widely used text books in SRF published by Wiley. Padamsee received the IEEE Particle Accelerator and Science Technology (PAST) in 2012. He was elected APS Fellow in 1993. He mentored many graduate students over the course of his career. In 2014 Fermilab appointed Padamsee as Head of the Technical Division to oversee the development of SRF for the Linac Coherent Light Source –II at SLAC, as well as for Proton Improvement Program (PIP-II) at Fermilab.