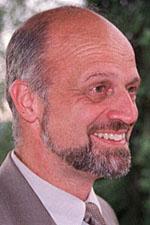 
"For his pioneering contributions to the study of chaotic motion in fluids, scientific computation, and vortex dynamics, and most notably for the development of the concept of chaotic advection."


Hassan Aref holds a cand. scient. degree from University of Copenhagen, and a PhD from Cornell University, both in physics. He was a faculty member at Brown University 1980-85 and at University of California, San Diego 1985-92. From 1989-92 he was Chief Scientist at the San Diego Supercomputer Center. He assumed his current position of professor and head, Department of Theoretical and Applied Mechanics, University of Illinois at Urbana-Champaign, in 1992.

Aref's main field of research is fluid mechanics. He is particularly well known for introducing and naming the mechanism of "chaotic advection". He is also well known for work on point vortex dynamics, and for numerical simulation studies of vortex flows, flows with sharp interfaces, and foam structure and evolution. Aref was Associate Editor of Journal of Fluid Mechanics 1984-94, founding editor with D. G. Crighton of Cambridge Texts in Applied Mathematics, and a National Science Foundation Presidential Young Investigator 1985-90. He is a Foreign Member of the Danish Centre for Applied Mathematics and Mechanics, and a Fellow of the American Physical Society.