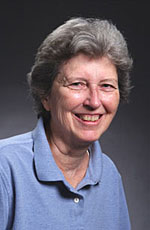 
"For her pivotal achievement and critical contribution as the leader in the design, construction, commissioning and operation of the Tevatron and for her continued contributions to the development of high gradient superconducting linear accelerators as well as bright and intense electron sources."


Helen Thom Edwards attended Cornell University, Ithaca N.Y. where she received her B.A. (1957) Masters and Ph.D. (1966). She served as a Research Associate at Cornell from 1966 through 1969 and worked on the commissioning of the 10 GeV electron synchrotron and on resonant beam extraction.

She joined the Fermilab staff in late 1969 where in association with Roy Billinge she lead the effort which brought the Fermilab 8 GeV Booster into operation. Then she was instrumental in commissioning the 400 GeV Main Accelerator, and beam slow extraction. In the late 70's and 80's she was a co- leader in the construction of the Tevatron and served as Deputy then Head (1987) of the Accelerator Division.

From 1989 to early 1991, she served as Technical Director at the SSC. After leaving the SSC she joined DESY in Hamburg Germany and became interested in RF superconductivity. She was TESLA Test Facility project leader for 2 years in the mid 90's and presently has joint appointments at DESY and Fermilab. She is currently engaged in applying RF superconductivity in the Fermilab program and research in electron photoinjector development for LC application. She is actively supporting international collaboration in the LC program.