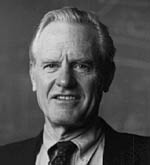 
"For his important role in creating and leading the Union of Concerned Scientists, which has had a lasting impact on many scientific issues of concern to society, and for his outstanding personal contributions to these areas and education at all levels."


Dr. Henry W. Kendall is currently J. A. Stratton Professor of Physics at the Massachusetts Institute of Technology. He has served as the Chariman of the Board of the Union of Concerned Scientists since 1974 and was a founding member of the organization. A particle physicist, he was, along with two colleagues, awarded the Nobel prize in physics in 1990.

Dr. Kendall has been active in writing, analysis and public activities on US energy and defense issues and in the global issues of environmental pressures, resource management and population growth. He is a co-author of numerous studies and books related to the nuclear arms race, nuclear power and renewable energy. His works include "Population, Environment and Resource Problems -- A Warning from World Scientists", prepared for the United Nations International Conference on Population and Development in September 1994, The Fallacy of Star Wars (1984), "No First Use" (Scientific American,1984), "Anti-satellite Weapons" (Scientific American, June 1984), "Space-based Missle Defense" (Scientific American, October 1984), &quot:Accidental Missle Launch" (Scientific American, December 1990), Beyond the Freeze: The Road to Nuclear Sanity (Beacon Press, 1982), Energy Strategies: Toward a Solar Future (Ballinger Publishing Company, 1980) and numerous reports from the Union of Concerned Scientists on safety and regulatory problems with nuclear power. He also co-authored "Constraints on the Expansion of the Global Food Supply" (AMBIO, 1994).

Dr. Kendall served for a decade as a consultant to the Defense Department on classified matters through membership in the Jason Group of the Institute for Defense Analyses. He was a panel Chair on the Secretary of Energy's Task Force on Alternative Futures for the National Laboratories (May 1995 - February 1996), organized expert panels for the World Bank, is Chair of the Panel on Transgenic Crops for the Bank and a member of the National Academy of Science's Panel on Inertial Confinement Fusion, concerned with matters relating to the US nuclear Stockpile Stewardship Program. He has testified numerous times before Congress on the threat of nuclear war, energy policy, nuclear power issues, controlling oil well fires, anti-personnel mine clearing and other matters. He has lectured widely and appeared on many national television programs.

He received his undergraduate degree from Amherst College (1950) and his Ph.D. from the Massachusetts Institute of Technology (1955). He taught at Standford University from 1956 to 1961 before returning to M.I.T., where he has remained since.

He has remained an active teacher and continues in physics research employing the Stanford Linear Accelerator at Stanford University.