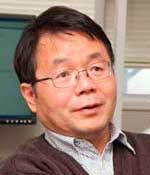 
"For his discovery of iron-based superconductors."


Hideo Hosono is the founding director of Materials Research Center of Element Strategy, and a professor of Frontier Research Center at Tokyo Institute of Technology. He received his B.E.in 1977 and his Ph.D. in 1982, both in applied chemistry from Tokyo Metropolitan University. He became a professor of Tokyo Tech in 1999 via associate professors at Nagoya Tech, National Institute for Molecular Science, and Tokyo Tech. His research at early stage including thesis work is electron spin resonance on oxide glasses and elucidation of point defects in amorphous SiO2. Since 2003, he has concentrated on electro-active function cultivation of transparent oxide-based materials to date. The representative achievements are creation f transparent amorphous oxide semiconductors (TAOS) with a large electron mobility and their application to thin film transistors (TFTs) and conversion of a cement constituent 12CaO·7Al2O3 (C12A7) to metallic conductor and eventually superconductor. Started from 2013 practical application of InGaZnOx (IGZO) –TFTs as the backplane of tablet PCs, smart phones and large-sized OLED-TV. His current interests are iron-based superconductors and electride materials. Hosono received Otto-Schott Research Award, W.H. Zachariasen Award and Jan Raychman Prize, and is a Thompson Reuter Citation Laureate in 2013 in physics. He is a member of APS, MRS and SID.