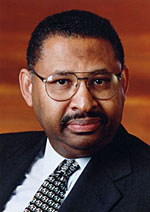 
"For his significant contributions to experimental high energy physics, for his important role in formulating governmental science policy, for his service as a university administrator at several universities, and for his advocacy of diversity and educational opportunity at all levels."

His research area is experimental high energy physics and he is currently conducting research at the European Laboratory for Particle Physics. Neal also participates in the DZERO collaboration that in 1995 announced the discovery of the top quark. He has led many experiments that have elucidated the nature of spin effects in high energy particle interactions, including proton-proton elastic scattering, electron-positron scattering and in various inclusive hadronic reactions.

Neal has served as a Regent of the Smithsonian Institution and on advisory boards for several national laboratories. He has been a member of the National Science Board, served as Chairman of the NSF Physics Advisory Committee, and has delivered testimony on numerous occasions to Congress.