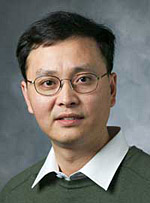 
"For developing novel synthesis pathways for preparing carbon and boron nitride nanotubes and for pioneering applications of these for sensing, electronics and nanomechanics."


Hongjie Dai was born in Shaoyang, Hunan, P. R. China. He received his B.S. degree from Tsinghua University in Beijing in 1989, his M.S. from Columbia University in 1991, and his Ph.D. from Harvard University in 1994. After postdoctoral work with Richard E. Smalley at Rice University, in 1997, he joined the faculty of the Chemistry Department at Stanford University where he is currently an Associate Professor of Chemistry. Prior to the APS James McGroddy Prize for 2006, he received the Julius Springer Prize for Applied Physics in 2004, a Camille Dreyfus Teacher-Scholar Award in 2002, the American Chemical Society Pure Chemistry Award in 2002, an Alfred P. Sloan Research Fellow in 2001, and a Packard Fellowship for Science and Engineering in 1999.