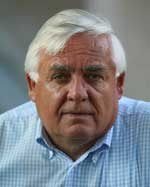 
"For the invention of the COLTRIMS technique and his many contributions to AMO physics."


In 1969 Horst Schmidt-Böcking received his PHD in nuclear physics at the university Heidelberg. Working at the Tandem accelerators at the MPI für Kernphysik in Heidelberg in the field of nuclear physics in 1973 he started his research in atomic collision physics using nuclear coincidence techniques. In 1974 he moved to the university Frankfurt, where he passed in 1978 his habilitation. At the near-by GSI accelerator facility he investigated in super heavy ion atom collisions inner shell ionization and quasimolecular x-ray emission as well as multiple ionization processes. During these years he has spent about 9 months at the Weizmann Institute in Rehovot. After two years stay at the Hahn-Meitner-Institut (1980-82) he accepted a professorship at Frankfurt university, where he stayed till his retirement in 2004. In 2001 he received the distinguished Stefan Lyson Professorship. He has had sabbatical stays at Kansas State University, LBNL in Berkeley, RIKEN in Tokyo and short stays at several other places (USA, Taiwan, etc.). Since 1985 together with his group he has developed multi-fragment coincident imaging techniques like COLTRIMS and has applied COLTRIMS in numerous fragmentation processes using, ions, electrons, photons and LASERS for multiple ionization. He is a fellow of the APS and the Institute of Physics. In 1991 he received the Max-Planck-Forschungspreis, in 1995 the Eminent scientist award of RIKEN and several adjunct professor ships in USA and PR of China.