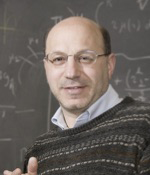 
"For seminal contributions to our understanding of low Reynolds number flows, microfluidics, interfacial phenomena, and biological fluid dynamics, and for his inspirational contributions to teaching and communicating the beauty and power of fluid mechanics, physics and engineering."


Howard Alvin Stone, Ph.D., is the Donald R. Dixon ’69 and Elizabeth W. Dixon Professor in Mechanical and Aerospace Engineering at Princeton University (N.J.). Dr. Stone is a fluid dynamicist who uses experiments, theory and numerical simulations to study transport problems at the intersections of engineering, biology, physics, and applied mathematics. He is known for developing original research directions in microfluidics including studies and applications involving bubbles and droplets, red blood cells, bacteria, chemical kinetics, etc. Dr. Stone received his B.S. in chemical engineering from the University of California, Davis in 1982 and his Ph.D. in chemical engineering from the California Institute of Technology (Pasadena) in 1988. Dr. Stone joined the faculty of the School of Engineering and Applied Sciences at Harvard University (Cambridge, Mass.) in 1989, eventually becoming the Vicky Joseph Professor of Engineering and Applied Mathematics. In 2000, Dr. Stone was named a Harvard College Professor for his contributions to undergraduate education. Dr. Stone moved to Princeton University in 2009. In 2008, Dr. Stone was named the first recipient of the G.K. Batchelor Prize in Fluid Dynamics. He was elected to the National Academy of Engineering in 2009, the American Academy of Arts and Sciences in 2011, and the National Academy of Sciences in 2014. Dr. Stone is a fellow of the American Physical Society (APS) and is past chair of the APS Division of Fluid Dynamics.