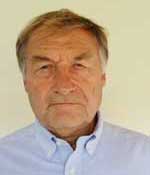 
"For developing foundational experimental and theoretical tools to enable and guide generations of experiments in relativistic heavy ion physics. The combination of experiment and theory led to the initial discoveries at RHIC, ongoing precision studies of the properties of hot nuclear matter, and to exploration of the nuclear matter phase diagram."


Howard Wieman received his BS from Oregon State University in 1966. He completed his PhD under Isaac Halpern at University of Washington Seattle in 1975. After a post-doc at the University of Colorado, he started at the Lawrence Berkeley National Lab (LBNL) as Outside-User Liaison for the 88” Cyclotron. At LBNL he worked on a number of detector related developments at the Bevalac, including design and installation of the Low Energy Beam Line, and led the EOS Time Projection Chamber (TPC) development. He was co-group leader with Hans Georg Ritter for the operation of the EOS TPC. While at LBNL, he was employed for a time by Gesellschaft für Schwerionenforschung (GSI).
Howard was the physicist in charge of designing and building the TPC portion of the STAR experiment facility which was installed at the RHIC collider. Leadership of this project was shared with mechanical engineer, Russell Wells. The TPC provides tracking for the high energy, heavy ion collisions at STAR. At the time of installation, this was the largest TPC built.
He initiated and guided the design and construction of a vertex detector (HFT PXL) which was installed and began operation in the STAR experiment in 2014. This vertex detector is the first to use monolithic CMOS pixel technology in a collider experiment. It is a significant advance in vertex detector performance and was developed to identify D meson decays in the high track density environment of heavy ion collisions. The CMOS pixel chips were developed by Marc Winter’s group at Institut Pluridisciplinaire Hubert Curien (IPHC).
Howard received the LBNL J.M. Nitschke Technical Excellence Award and is a Fellow of the American Physical Society.
He retired from LBNL in 2011, but has continued work at LBNL in the Nuclear Science Division.