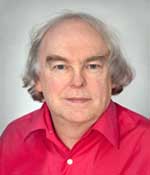 
Ian Hinchliffe obtained his BA in physics from UniversityCollege Oxford in 1974 and his D.Phil in theoretical particle physics from St. Johns College Oxford in 1977. In 1983 he became a Staff Senior Scientist at Lawrence Berkeley National Laboratory, where he served as head of the theoretical physics group from 1992 to 1999. Trained in theoretical physics, his main activity now is with the ATLAS collaboration at CERNs Large Hadron Collider, which he joined in 1996; he served as ATLAS physics coordinator in 2006-2007 and currently heads Berkeley Labs ATLAS group. His research emphasizes the importance of experiment in testing theoretical ideas, and in driving theoretical developments aimed at understanding interactions among fundamental particles. Most of his work demonstrates how the Standard Model, and the extensions designed to address some of its shortcomings, can be tested at hadron colliders. Since ATLAS started taking data in 2009, he is delighted to be participating directly in exploring the TeV energy scale.