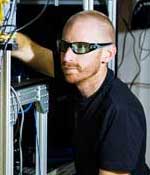 
Ian Spielman received his undergraduate degree in Physics and Mathematics from the University of Oklahoma in 1998, and proceeded to Caltech for his graduate research studying the Josephson effect in Quantum Hall bilayers, graduating in 2004. He then was awarded a two year NRC postdoctoral fellowship in the Laser Cooling and Trapping group NIST Gaithersburg, studying ultracold atoms in optical lattice potentials – physically disparate, but intellectually related to his graduate research. Then in 2006 he was hired as a permanent member of the staff at NIST, and a fellow of the Joint Quantum Institute. At the JQI, Spielman’s research has focused on creating artificial gauge fields for ultracold atomic gases. This research has lead to artificial magnetic fields, spin-orbit coupling along with the measurement of associated effects (Hall, spin-Hall, and so forth). Awards: was elected a fellow of the APS in 2012, received the Junior BEC award in 2011, the UIPAP prize in 2011, the Arthur S. Flemming award in 2011, and a PECASE award in 2010.