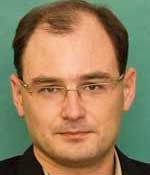 
"For the prediction of interesting new wave effects in non-stationary plasmas and for the elegant variational formulation of wave-particle and wave-wave interactions that generalizes the ponderomotive force theory."


Ilya Dodin graduated from Nizhniy Novgorod State University (Nizhniy Novgorod, Russia) in 1998/2000 with BA/MA degrees in physics. In 2005, he obtained a PhD in plasma physics from Princeton University. He then continued working at Princeton as postdoctoral research associate and associate research scholar in the Department of Astrophysical Sciences. Since 2009, he also teaches, as lecturer, a course on plasma waves and instabilities within the Princeton Graduate Program in Plasma Physics. Since 2011, Ilya Dodin's primary occupation is at Princeton Plasma Physics Laboratory, where he is employed as staff research physicist. His research is mainly analytical and is focused on the fundamental Lagrangian physics of waves and wave-particle interactions, particularly including various manifestations of the ponderomotive effect and its relation to properties of linear and nonlinear waves in plasmas. In 2011, Ilya Dodin received Young Scientist Medal and Prize from the International Union of Pure and Applied Physics, Commission on Plasma Physics. He is also a recipient of Harold W. Dodds Fellowship from Princeton University (2003) and an APS member since 2000.