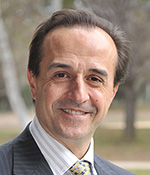 
Ivan Marusic, Ph.D., is a Redmond Barry Distinguished Professor in the Department of Mechanical Engineering at the University of Melbourne (Australia), and an Australian Research Council Laureate Fellow. In 1987, he graduated with honors from the University of Melbourne with a degree in mechanical engineering; in 1992, he received his Ph.D at the university. His research is primarily in experimental and theoretical studies of turbulence at high Reynolds numbers, including studies in atmospheric surface layer flows and aquatic ecosystems. From 1998 to 2002, Dr. Marusic was an assistant professor at the University of Minnesota (Minneapolis), where he was a recipient of an National Science Foundation Career Award and a Packard Fellowship in Science and Engineering. He returned to Melbourne in 2007 as an ARC Federation Fellow. He is also a fellow of the Australian Academy of Science, the American Physical Society, and the Australasian Fluid Mechanics Society.