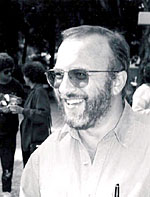 
"For research in metallic heterostructures and superlattices, communicated with unusual enthusiasm and eloquence."


Ivan K. Schuller received his Licenciado (1970) from the University of Chile, M.S. degree (1972) and Ph.D. (1976) from Northwestern University. From 1978-1987 he was a Senior Physicist and Group Leader at Argonne National Laboratory. Since 1987 he has been a Professor of Physics at the University of California, San Diego, and in addition to this position, presently is Layer Leader-Materials and Devices of CAL-(IT)2 Institute, and Director-AFOSR-MURI at UCSD. He held visiting professorships at the Catholic University - Santiago, Chile, Universidad del Valle-Cali, Colombia and the Catholic University - Leuven, Belgium.

Current scientific interests include the preparation, characterization and study of Metallic Superlattices, Heterostructures and Nanostructures. His studies are dedicated to understanding the connection between structure and physical properties; principally electrical transport, magnetism, superconductivity, and mechanical properties. Prof. Schuller has also dedicated considerable effort to popularizing physics through public lectures and educational T.V.