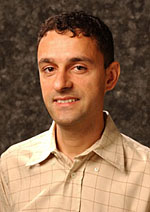 
"For fundamental advances in the theory of polarization, localization and electric fields in crystalline insulators."


Ivo Souza, a citizen of Portugal, received his undergraduate degree in Engineering Physics in 1995 from Universidade Técnica de Lisboa, where he started doing research in solid-state physics with José Luís Martins. He received his PhD in Physics in 2000 from the University of Illinois at Urbana-Champaign, under the supervision of Richard M. Martin. Afterwards he spent three and a half years doing post-doctoral work in the group of David Vanderbilt at Rutgers University . In January of 2004 he joined the Department of Physics at the University of California, Berkeley, as an Assistant Professor.

His research is in theoretical and computational solid-state physics. He is interested in methodological developments aimed at expanding the range of properties that can be studied from first-principles. Current projects include modelling the nonlinear optical properties of polar semiconductors in the far infra-red, and the vibrational spectroscopy of nanoclusters.