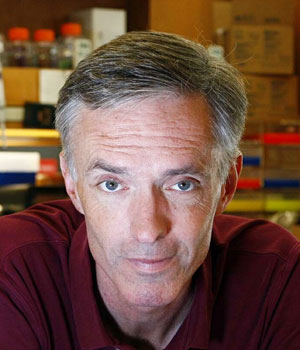 
"For pioneering contributions at the interface of physics and biology, in particular the establishment of the field of synthetic biology and applications of statistical physics and nonlinear dynamics in biology and medicine."

Jim Collins is the Termeer Professor of Medical Engineering & Science and Professor of Biological Engineering at MIT, as well as a Member of the Harvard-MIT Health Sciences & Technology Faculty. He is also a Core Founding Faculty member of the Wyss Institute for Biologically Inspired Engineering at Harvard University, and an Institute Member ofthe Broad Institute of MIT and Harvard. Professor Collins received his BA in Physics from the College of theHoly Cross in 1987 and his PhD in Medical Engineering from the University of Oxford in 1990. He is one of the founders of the field of synthetic biology, and his research group is currently focused on using synthetic biology to create next-generation diagnostics and therapeutics. Professor Collins' patented technologies have been licensed by over 25 biotech, pharma and medical devices companies, and he has helped to launch a number of companies, including Synlogic (NASDAQ: SYBX). He has received numerous awards and honors, including a Rhodes Scholarship and a MacArthur "Genius" Award, and he is an elected member of all three national academies - the National Academy of Sciences, the National Academy of Engineering, and the National Academy of Medicine.