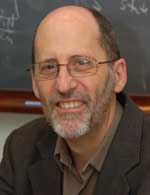 
Jim Eisenstein received his AB degree from Oberlin College in 1974 and his PhD in physics from UC Berkeley in 1980. After a brief stint as an assistant professor of physics at Williams College, he moved to Bell Laboratories in 1983, becoming a Distinguished Member of Technical Staff in 1993. In 1996 Eisenstein moved to Caltech where he is now the Frank J. Roshek Professor of Physics and Applied Physics.

Eisenstein's research is focussed on the collective behavior of two-dimensional electron systems in semiconductor heterostructures at low temperatures and high magnetic fields. He is especially interested in double layer 2D systems since they exhibit a variety of unusual condensed phases which are not found in ordinary single layer systems. In addition, his group is studying the fragile 5/2 fractional quantum Hall state as it may have implications for quantum information science.

Eisenstein has served on several NRC committees and panels, including the Solid State Sciences Committee, and is currently a Member-at-Large of the DCMP Executive Committee. Eisenstein is member and Fellow of the APS and was elected to the National Academy of Sciences in 2005.