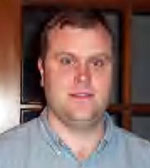 
James K. Thompson was born in Fort Worth, Texas, and moved to Orlando, Florida as a child. He pursued his undergraduate studies in physics at the Florida State University as a Barry M. Goldwater and National Merit Scholar, and was named the university-wide academic sophomore, junior, and senior of the year. His undergraduate research at FSU with Edmund G. Myers was on accelerator-based laser spectroscopy of highly charged ions for testing QED. Other work included two stints at Argonne National Laboratory helping to develop the ATLAS particle accelerator (at ANL) and the ATLAS detector (at DESY). After receiving his B.A. in 1995, he continued his research with Myers for his M.S. In 1997, he moved to the Massachusetts Institute of Technolgy where he joined the single-ion mass spectrometry lab of David E. Pritchard. For his Ph.D. work on trapping and detecting single ions in a Penning trap, James developed the equivalent of a two-ion balance that produced the most accurate mass comparisons in the world. these mass comparisons resulted in the most accurate direct test of Einstein's mass-energy relationship E=mc2, as well as the discovery of a new cyclotron frequency shift. The cyclotron frequency shift enabled the most accurate determination of the dipole moment of a charged molecule, and a new method to nondestructively measure the quantum state of a single molecule. Since completing his Ph.D. in 2003, James has been working as a Postdoctoral Fellow with Vladan Vuletic at the MIT-Harvard Center for Ultracold Atoms. His current research focuses on ensembles of laser-cooled atoms collectively coupled to an optical cavity. The goals of the research include on-demand single photon generation, spin-squeezing, and cooling of atomic and molecular ensembles.