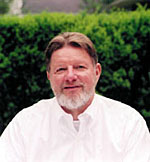 
"For separate as well as joint work in proving the existence and uniqueness of solutions to Einstein's gravitational field equations for a variety of sources, and for formulating these equations so as to improve numerical solution procedures with relevance to realistic physical systems."


James Wesley York, Jr. was born in Raleigh, North Carolina, and studied at North Carolina State University, where he received a B.S. with High Honors and his Ph.D. in 1966. He was inducted into Phi Beta Kappa, and, in 1997 he was designated Outstanding Alumnus of the College of Physical and Mathematical Sciences.

York joined the faculty of Princeton University in 1968, where he initiated studies of the constraint equations of Einstein's theory, as well as working at the entire interface between analytical and numerical relativity. For nearly 30 years he played this role alone. This challenging area remains at the center of his research and thinking. His other principal research interest is the statistical thermodynamics of black holes and gravitational fields generally. There he has discovered the quasi-local energy, and the concept of the boundary quasi-local stress-energy-momentum tensor. This is known as the Brown-York tensor in recognition of an especially clear presentation of the fundamental ideas in a 1993 paper by these authors. York believes that with his method of inclusion of gravity, he will be able to complete the framework of statistical mechanics. Another of his interests is the introduction of modern mathematical techniques and viewpoints into the teaching of theoretical physics.

In 1973 York joined the faculty of the University of North Carolina at Chapel Hill. He became Distinguished Professor in 1989 and retired {\em Emeritus} in 2002, when he joined the faculty of Cornell University as Professor of Physics, associated with the Laboratory for Elementary Particle Physics and the Center for Radiophysics and Space Research.

York is a Fellow of the American Physical Society, a member of the Society for General Relativity and Gravitation and other professional societies. He has been a biographee of {\it Who's Who in America} since 1986.