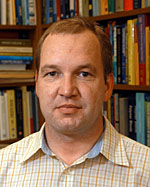 
"For his highly creative manipulation of surface properties via monolayer and macromolecular films."


Jan Genzer, a native of the Czech Republic, received the Diploma-engineer degree (Dipl.-Ing.) in Chemical & Materials Engineering from the Institute of Chemical Technology in Prague, Czech Republic, in 1989. In 1991 he moved to the U.S. to pursue graduate studies at the University of Pennsylvania under the direction of Professor Russ Composto, receiving the Ph.D. degree in Materials Science & Engineering in 1996. Since 1996 he was a post-doctoral student with Professor Ed Kramer first at Cornell University (1996-1997) and later at University of California at Santa Barbara (1997-1998). In the fall 1998 he joined the faculty of North Carolina State University as an Assistant Professor of Chemical Engineering. In 2004 he was promoted to the rank of an Associate Professor of chemical engineering. His honors include the Camille Dreyfus Teacher-Scholar Award, the Sigma Xi research award, the Alcoa Engineering award, and the NSF CAREER award. He is a member of the American physical Society, American Chemical Society and the Materials Research Society. His group at North Carolina State University is actively involved in research related to the behavior of polymers at interfaces and in confined geometries, molecular self-assembly, and combinatorial materials science.