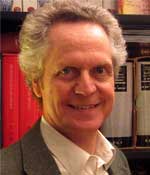 
"For his seminal contributions to the physics of light-atom interactions and cold atomic gases."


Jean Dalibard is director of research at CNRS and works in the Kastler Brossel laboratory at Ecole normale supérieure (ENS). He is also professor at Ecole polytechnique.
After an internship in Alain Aspect’s team on the violation of Bell’s inequality (1982),  Jean Dalibard earned his doctorate in Physics at ENS in 1986 under the supervision of Claude Cohen-Tannoudji. In 1991 he was an invited scientist at NIST in the group of Bill Phillips.
Jean Dalibard has been involved in the developments of methods for cooling and trapping atoms with light, with contributions from experimental and theoretical sides. His recent interests deal with the physics of quantum gases, such as the dynamics of vortices in rotating Bose-Einstein condensates. He is also interested in low-dimensional aspects of many-body physics, in particular the Berezinskii-Kosterlitz-Thouless superfluid transition that shows up in 2D atomic quantum gases.
Jean Dalibard is a member of the French Academy of Sciences (2004). Other rewards he received include the Prix Jean Ricard from the French Physical Society (2000), the Blaise Pascal Medal for Physics from the European Academy of Sciences (2009), and the “Prix des Trois Physiciens” (2010). He was a visiting fellow at Trinity College, Cambridge (UK) in 2010.