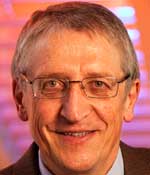 
"For his outstanding computational studies of the electronic, charge transport, and optical properties of conjugated polymers and related materials and their impact on organic electronics and photonics."


Jean-Luc Bredas received his B.S. (1976) and Ph.D. (1979) degrees from the University of Namur, Belgium. In 1988, he was appointed Professor at the University of Mons, Belgium, where he established the Laboratory for Chemistry of Novel Materials. While keeping an Extraordinary Professorship appointment in Mons, he joined the University of Arizona in 1999 before moving in 2003 to the Georgia Institute of Technology. At Georgia Tech, he is Regents’ Professor of Chemistry and Biochemistry and holds the Vasser-Woolley and Georgia Research Alliance Chair in Molecular Design. Since 2011, he is Adjunct Professor of Chemistry at King Abdulaziz University in Jeddah. Jean-Luc Bredas is a Member of the International Academy of Quantum Molecular Science and the Royal Academy of Belgium. He is the recipient of the 1997 Francqui Prize, the 2000 Quinquennial Prize of the Belgian National Science Foundation, the 2001 Italgas Prize, the 2003 Descartes Prize of the European Union, and the 2010 Charles H. Stone Award of the ACS. He has published over 850 refereed articles and given over 400 invited presentations. Since 2008, he has served as Editor for “Chemistry of Materials”. The research interests of his group focus on the computational characterization and design of novel organic materials of relevance for organic electronics and photonics.