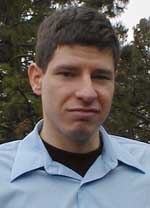 
"Thesis title: Measurement of Branching Fractions and CP-Violating Asymmetries in B0->K^0K^0bar and B^+->K^0barK+ Decays at the BaBar Experiment"


I was born in Poland in 1979 and moved to the United States when I was 11 years old.  I attended the University of California at Berkeley, receiving a B.A. degree in physics and mathematics.  I began my research involvement in particle physics at Berkeley, working on the E158 experiment at the Stanford Linear Accelerator Center under the supervision of Professor Yury Kolomensky.  The experiment measured the weak mixing angle of the Standard Model at low momentum transfer in Møller scattering of a beam of polarized electrons off of a liquid hydrogen target.

I conducted my doctoral studies at Princeton University and obtained the Ph.D. degree in 2007, working on the BABAR experiment under the supervision of Professors James D. Olsen and A. J. Stewart Smith.  I participated in the R&D, construction, installation, and operations of the upgrade to the BABAR muon detector using Limited Streamer Tube technology.  This project has significantly improved muon identification in about half of the final dataset accumulated by the experiment.  For my main dissertation topic, I studied the violation of the charge-parity (CP) symmetry in the rare decays of B mesons to two kaons.  These decays, occurring at the rate of one per million, are dominated by processes involving the neutral-current decay of a b quark to a d quark involving a virtual-particle loop and gluon emission.  These b-to-d penguin decays are potentially sensitive to the effect of new particles and symmetries beyond the Standard Model.  My work resulted in the first observation of these processes and the first measurement of CP violating parameters in this class of decays, opening up a new area of investigation at the B factories.

I am currently working on the ATLAS experiment as a Chamberlain Fellow at the Lawrence Berkeley National Laboratory, participating with great excitement in the process that will hopefully lead to new discoveries at the energy frontier, which are complementary to the precision measurements of BABAR at lower energies.