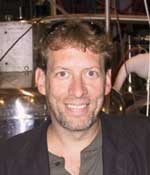 
Jeffrey S. Hangst is a graduate of MIT (SB,SM) and of the University of Chicago (PhD).  He worked at Fermilab and at Argonne while doing his PhD at Chicago.  He moved to Aarhus University in Denmark in 1994 and has been there since.  Hangst received the European Physical Society's 1996 accelerator award for a young scientist for his work on laser cooling of stored ion beams in the ASTRID storage ring in Aarhus. He has been stationed at CERN full-time since 2001. He is a founding member of the ATHENA antihydrogen collaboration and was the Physics Coordinator of the experiment that produced the first cold antihydrogen atoms at the CERN Antiproton Decelerator in 2002.   He is the founder and Spokesperson of the ALPHA collaboration, which demonstrated trapping of antihydrogen atoms in 2010 (the work which is being honored here).  Hangst was elected to fellowship of the APS, Division of Plasma Physics, in 2005.