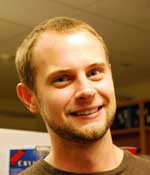 
Jeffrey Moffitt received his B.A. in Physics from the College of Wooster in 2003, where he studied the dynamics of cellular automata under the direction of Dr. John Lindner. Jeffrey received his M.A. in 2005 and his Ph.D. in 2009 from the University of California at Berkeley. Under the guidance of Dr. Carlos Bustamante he developed experimental and theoretical tools for the study of molecular motors. After his Ph.D., Moffitt worked as a visiting scholar in the laboratory of Dr. Jens Michaelis at the Ludwig-Maximillians-Universitaet in Munich, Germany, where he developed new techniques in super-resolution microscopy. Currently, Jeffrey is studying the dynamics of genetic networks in E. coli with Dr. Philippe Cluzel at Harvard University. Jeffrey is a recipient of the National Science Foundation's Graduate Research Fellowship and the Helen Hay Whitney Fellowship. He is a member of the American Physical Society.