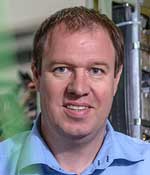 
"For technical contributions and the use of Penning traps for the precise measurement of short-lived, radioactive nuclei such as halo nuclei and highly charged ions."


Jens Dilling, Ph.D., is the associate laboratory director of physical sciences at TRIUMF, the Canadian National Laboratory for Particle and Nuclear Physics. Dr. Dilling performed his undergraduate and doctoral work in physics at the University of Heidelberg (Germany), receiving his Ph.D. in 2001. An expert in trapping radioactive isotopes, Dr. Diling’s research focuses on understanding what holds atoms together at the most fundamental level, as well as on precision measurements in nuclear physics. Dr. Dilling developed the TITAN, (TRIUMF’s Ion Trap for Atomic and Nuclear Science) facility at ISAC (Isotope Separator and Accelerator), and played a key role in its design, building, and operation. TITAN is the fastest, and one of the most precise, on-line, ion trap mass spectrometers in the world. Dr. Dilling received the Canadian Association of Physicists Vogt Award for outstanding contributions to subatomic physics research in 2013, and is a fellow of the American Physical Society. He also serves on multiple national and international committees and boards.