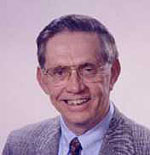 
"For leadership in addressing technically complex and often controversial national security issues, such as anti-ballistic missiles, stockpile stewardship, and a comprehensive test ban; and for setting a high standard for applying the rigorous methods of physics to the challenging problems of integrating advanced technology with sound policy in a democratic society."


Dr. Jeremiah D. Sullivan received a BS degree in physics from Carnegie Mellon University in 1960 and a Ph.D. in physics from Princeton University in 1964. After a postdoctoral appointment in the theory group of the Stanford Linear Accelerator Center, he joined the faculty of the University of Illinois at Urbana-Champaign in 1967 and is currently professor of physics. He is a Fellow of the American Physical Society and a former NSF Graduate Fellow and Alfred P. Sloan Faculty Fellow

The first two decades of Dr. Sullivan's professional career were devoted primarily to teaching and research on the fundamental interactions of subatomic particles. Since that time, his research and professional interests have concentrated on security, arms control, and public policy. Current interests include: nuclear test ban treaties, ballistic missile defenses, proliferation of weapons of mass destruction, and technology for peacekeeping.

Dr. Sullivan has served on the APS Panel on Public Affairs and was a member of the APS Study Group on the Science and Technology of Directed Energy Weapons. He has been a consultant to the U.S. Government on science and technology issues via the JASON group since 1974. Sullivan is currently Chair of the DOE Nonproliferation and National Security Advisory Committee.