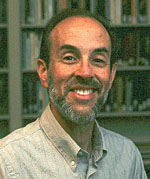 
"For his elucidation of chaos, instabilities, mixing and pattern formation in various contexts including fluid convection, and his contributions to our understanding of surface waves, film and granular flows, through his clever experiments, lucid papers and lively lectures."


Jerry Gollub received his A.B from Oberlin College in 1966, and his Ph.D. in experimental condensed matter physics at Harvard University in 1971. He has been on the faculty of Haverford College since 1970, and is also affiliated with the University of Pennsylvania. He has undertaken a wide range of experiments on nonlinear and fluid dynamics, including studies of instabilities and pattern formation in fluids, chaotic dynamics and turbulence, nonlinear waves, mixing in fluids, and the dynamics of granular materials. He has co-authored an undergraduate textbook on nonlinear dynamics, and teaches physics courses for a broad audience. Gollub is a member of the National Academy of Sciences, a Fellow of the American Academy of Arts and Sciences, and received the first APS Award for Research in an Undergraduate Institution. He co-chaired a study of advanced high school mathematics and science for the National Research Council (http://www.nap.edu/catalog/10129.html), and has served on the APS Executive Board.