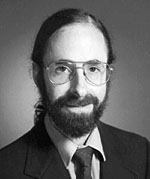 
Dr. Tersoff received his BA in physics from Swarthmore College in 1977, and his Ph.D. from the University of California at Berkeley in 1982. He then spent two years as a postdoc at Bell Laboratories before taking his current Research Staff position at the IBM Thomas J. Watson Research Center. He has worked in a variety of areas relating to surface and interface physics and materials physics, including theories of scanning tunneling microscopy, Schottky barriers, heterojunction band lineups, model interatomic potentials, stress effects at surfaces and strain relaxation in epitaxial thin films. Most recently he has addressed ways in which, during heteroepitaxial growth, strain can lead to controllable self-assembly and self-organization of nanostructures such as "quantum dots" and "quantum wires".