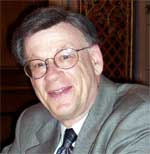 
"For discovery and characterization of organic-based magnets, and for observation and study of pedictable and previously unknown magnetic phenomena in these fascinating materials leading to fundamentally new science and the demonstrated potential for creative new technologies."


Joel S. Miller received a Bachelor of Science in Chemistry from Wayne State University (1967), and Ph. D. from UCLA (1971). After a postdoctoral fellowship at Stanford University, and several positions in industry including the Xerox Corporation and Du Pont, Joel S. Miller joined the University of Utah (1993) where he is a Distinguished Professor in the Department of Chemistry. He has been a Visiting Scientist at the Weizmann Institute and a Visiting Professor of Chemistry at the University of Pennsylvania, University of Barcelona, and Professeur Invité, Institut de Science et d'Ingénierie Supramoléculaires (ISIS), Université Louis Pasteur among other institutions. He is on the advisory boards of Advanced Materials, Chemistry - a European Journal, and a member of the Inorganic Synthesis Corporation. He also has been a Guest Editor for the Electrochemical Society's Interface, and the MRS Bulletin, edited seventeen monographs, and published over 450 papers. He was the recipient of the Pinguin Foundations Wilhelm Manchot Research Professorship at the Technische Universität Münich (1996), the American Chemical Society Award for Chemistry of Materials (2000), Governor's Medal for Science and Technology (2004), Utah Award (2003), among several other awards.