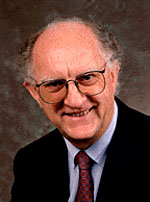 
"For his experimental and theoretical studies of Superconducting Quantum Interference Devices (SQUIDs), advancing the state-of-the-art of measurement science by applying SQUIDs to many areas of both fundamental and applied physics such as high-Tc superconductor analyses, NMR amplifiers, and cryogenic comparators."


Dr Clarke received his BA in 1964 and his Ph.D. in 1968, both from Cambridge University. After a postdoctoral appointment in the physics department at the University of California at Berkeley, he joined the faculty in 1969, where he is presently employed.

> Dr. Clarke has worked extensively on the theory and practice of low-Tc dc SQUIDS and applied them to such diverse applications as charge imbalance in superconductors, geophysics and nuclear magnetic resonance. Over the past decade, his group has been involved with high-Tc SQUIDS and is currently using them for biology, nuclear magnetic resonance and nondestructive evaluation. They are also developing gradiometers for magnetocardiology.

> Dr. Clarke is a fellow of the Royal Society of London, the APS and the AAAS. He has been awarded Sloan Foundation and Guggenheim Fellowships. He was awarded the Charles Vernon Boys Prize of the British Institute of Physics in 1977, and in 1987 was named California Scientist of the Year. He was also awarded the Fritz London Prize for research in low-temperature physics. In 1998, he is the Vice Chair of the APS Division of Condensed Matter Physics.