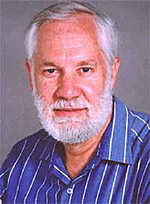 
"In recognition of their ultra-high precision measurements and extraordinarily detailed analyses of 0+ ‰ 0+ nuclear beta decay rates to explore the unitarity of the Cabibbo-Kobayashi-Maskawa quark mixing matrix as a test of the electroweak Standard Model."


John Hardy was born in Montreal, Canada and received his degrees from McGill University in that city: B.Sc. (Hon. Maths and Physics, 1961), M.Sc. (Nuclear Physics, 1963) and Ph.D. (Nuclear Physics, 1965). He spent from 1965-67 as an NRC (Canada) Post-doctoral Overseas Fellow at the Oxford University (England) Nuclear Physics Laboratory; and then went to the Lawrence Radiation Laboratory at the University of California, Berkeley, first as a Miller Fellow (1967-69) and then for a year as staff member. He returned in 1970 to Canada, joining the staff at the Chalk River Nuclear Laboratories of AECL, where he stayed for 27 years, eventually becoming division director responsible for the Tandem Accelerator Superconducting Cyclotron (TASCC) facility. He left AECL in 1997 to become a Professor of Physics and Group Leader at the Cyclotron Institute of Texas A&M University. He spent a years sabbatical (1976-77) with the ISOLDE group at CERN in Geneva.

Professor Hardy is a Fellow of the American Physical Society and of the Royal Society of Canada. He has previously received the D.W. Ambridge prize (1965) upon graduation from McGill University; the Herzberg medal (1976) from the Canadian Association of Physicists; and the Rutherford medal in physics (1981) from the Royal Society of Canada. He has served on numerous Program Advisory Committees at national laboratories and is currently chair of the PAC for the Holifield Radioactive Ion Beam Facility at Oak Ridge National Laboratory. He has also served on advisory committees to U.S. and Canadian funding agencies, as well as having been elected to the executive committee of the Nuclear Physics Division of the APS (2002-04) and as Vice President of the Academy of Science of the Royal Society of Canada (1992-95).

His current research interests are in nuclear tests of the weak interaction via superallowed beta-decay and of internal conversion; he concentrates on high-precision measurements. Past interests include exotic nuclei, atomic masses, delayed-particle decay, and transfer reactions. He has published more than 250 papers in physics.