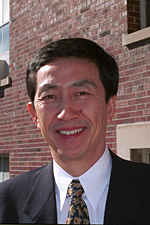 
"For his pioneering work in the development of direct numerical simulation as a tool in turbulence research and for his important contributions to the understanding of the physics and control of turbulent boundary layers."

Prior to joining UCLA he was with NASA Ames Research Center, where John Kim conducted research in the areas of transition and turbulence physics as a research scientist and Chief of the Turbulence and Transition Physics Branch. John Kim's primary research interest is numerical simulation of transitional and turbulent flows, physics and control of turbulent flows, and numerical algorithms for computational science. John Kim Kim has been a pioneer in developing direct numerical simulations (DNS) and large eddy simulations (LES) as a reliable and respected tool for studying physics of turbulence. He has been at the forefront of application of a new cutting-edge approach to flow control. His current interest is applying sytems control theoretic approach to turbulence control.

John Kim received a NASA Medal for Exceptional Scientific Achievement in 1985 and the 1994 H. Julien Allen Award from NASA Ames Research Center. He has been Editor of Physics of Fluids since 1998. He is a Fellow of the American Physical Society and a member of ASME and AIAA.